Archie Shepp, Raw Poetic, and Damu The Fudgemunk are pleased to announce their new album Ocean Bridges, out May 22nd on Redefinition Records. Entirely improvised, Ocean Bridges was intentionally created without any direction, resulting in a finished product with natural energy, a conversation of ideas that transcend genre. It blends live improvised music, jazz, hip-hop, and many other musical directions into a one-of-a-kind sound.

Check out some videos and detailed info below... also be sure to follow Damu & the crew on Instagram for some behind the scenes vids and to let him know what you think of the new music! 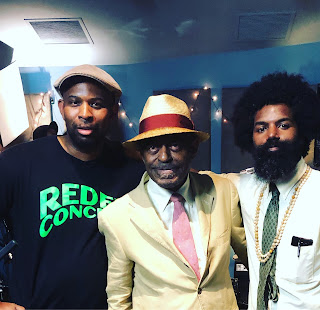 The collaborative album from Archie Shepp, Raw Poetic, and Damu the Fudgemunk is slowly shaping up to be the hip hop album of the year, or at the very least the hip hop/jazz hybrid album of the year. The second single, "Tulips," is another improvised song from the uncle/nephew team (Archie Shepp is Raw Poetic's uncle). The combination of live hip hop/jazz beats, Raw Poetic's vocals, and Shepp's saxophone is purely intoxicating. Much like the title suggests, "Tulips" is an undeniably positive, nearly sunny song. It's a free level of experimentation missing in today's overly produced hip hop world.

Raw Poetic explains the song: "I let the spring vibe name the song, and the flower that bloomed was a tulip. Sometimes you gotta let the music spell it out.”

About the album, OCEAN BRIDGES...

Archie Shepp, Raw Poetic, and Damu The Fudgemunk
Ocean Bridges (out May 22, 2020 on Redefinition Records)

Ocean Bridges was initially conceived after Jason Moore (aka independent, underground rapper Raw Poetic) attended an event with his mother at the Kennedy Center honoring his uncle, legendary saxophonist, Archie Shepp. Moore had sent over a dozen projects to Shepp over the last two decades, but after hearing some of Moore’s recent projects with producer/DJ, Damu The Fudgemunk, Mr. Shepp felt his nephew was, in a sense, “ready”. The album’s title, Ocean Bridges, intends to signify a bridging-of-the-gap in their family’s story and a re-establishing of the connection between young and old in their general community.

Ocean Bridges marks the first time Shepp and his nephew, Jason Moore (aka Raw Poetic), a successful rapper, educator, and children’s author in his own right, have put music to record for widespread release. In Moore’s own words: “I began writing down the parts in my head that could tell a story, a black American story that would expand across the ages, a story from my grandfather to my uncle, from my mother to me. We bridged the gaps of time, culture and struggle and made an album I always dreamt of. Ocean Bridges.”
-
WHAT ARE PEOPLE SAYING ABOUT OCEAN BRIDGES??
-
Washington Post Sunday Arts & Style feature

"The result is 'Ocean Bridges,' a fully improvised album on which Moore, Shepp and DJ/producer/drummer/vibraphonist Damu the Fudgemunk (aka Earl Davis), along with several hip-hop and jazz scene stalwarts of the D.C. region, tap into both of those genres' more experimental sides and ultimately find a sound that isn't fully aligned with either one.” — Washington Post
-
Newsweek’s What You Should Listen To Today:
"The hip-hop/jazz crossover is a refreshing take on both classic rap and jazz. Shepp's sax cuts through the rest of the band to provide passionate solos, as Raw Poetic sounds absolutely joyous to be working with and honoring his uncle.” — Newsweek
-
All Music Guide Review
"Raw Poetic's rhymes are furious and edifying; they iterate gratitude, anger, unity, collective suffering, the collective creative impulse, and survival.” — AMG
"The set's relaxed pace reveals instrumental music and speech as roots of the same metalinguistic tree, with rap, poetry, and polemic as its fertile branches. Because of the urgency, affirmation, and deeply moving immediacy of this project's voices funneled through an organic process of creation, Ocean Bridges stands in a class of its own.” — All Music Guide
"'Ocean Bridges' is inviting; its grooves and lyric flows never let go, making the attraction for modern jazz listeners and cutting-edge hip-hop fans palpable.” — All Music Guide
-
Afropop
"Part free jazz jam, part rehearsal, part seminar with an American music sage, this totally improvised record has an intriguing flow that invites you in and doesn’t let go.” — Afropop
-